You are a Bonsai Brawler!

You are a fine fighter, skilled in using and manipulating raw will to deliver the most debilitating hits - but it isn't just about fighting. Every brawler has something to protect.
-
This is the third in a series of micro-rpgs that I'm working on under a project called Planted TRPG or Planted 'Verse! Bonsai Brawlers is compatible to other releases and can be played with all other editions in the Planted 'Verse, including those still to be released.

Bonsai Brawlers was recently played by the great guys over at the GORM Podcast.  Click play to listen to their playthrough!

Thanks for giving us your time!

In order to download this Bonsai you must purchase it at or above the minimum price of $4 USD. You will get access to the following files:

Support this Bonsai at or above a special price point to receive something exclusive.

Each bought copy of "Bonsai Brawlers!" adds to the number of community copies, allowing someone else to grab it for free. Feel free to take a copy!

The game is super easy to read, but there's a little bit of weirdness in a few places for how information is presented. For example, the game uses "Game Master" at the top of its GM section, then uses "Garden Master" throughout. Also, the first page of the GM section covers essential rules for making player characters (ex: starting skill points,) but it tells players to keep out.  And the game isn't explicit about this, but a successful attack probably deals 1 hp damage if it isn't resisted?

There's also a super minor typo under Become Like Water where "day,at" is missing a space, but it's hard to even notice.

Crunch-wise, there are some cool, flavorful fighting styles available to players, and they provide a neat little metagame to combat. Moreover, I think two high-optimization Bonsais would be pretty evenly matched, and that the combat would be exciting to watch, which is not something that's always true of big, feature-length games by major publishers.

Plot-wise, Brawlers provides some cool story hooks, but it doesn't really have the page-space to dig into a lot of what the setting is like, so GMs might have to improvise some backstory there. That said, this is more opportunity than drawback.

Overall, I would strongly recommend this to anyone looking to check out a neat mini-rpg with a strong concept and some good design/crunch. The other plant-game-series title that I've read, Succulent Sorcerers, is similarly really cool.

Fairly straightforward micro-TTRPG in which you play as magical bonsai. The system mainly uses 1d6, so it's pretty accessible for new players. 3/5 stars - enjoyable. 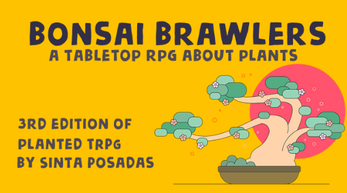