You've seen the power of the  Succulent Sorcerers, you've experienced how a Petal Paladin enacts their order, and you have been beholden to the strength of the Bonsai Brawlers - now, be enchanted by the prowess of the Mossy Mechanics!

Take on different mossy forms, and make mossy modifications to yourself!

In order to download this plant you must purchase it at or above the minimum price of $4 USD. You will get access to the following files:

Support this plant at or above a special price point to receive something exclusive.

Each bought copy of "Mossy Mechanics" adds to the number of community copies, allowing someone else to grab it for free. Feel free to take a copy!

The fourth entry in the Plant Games series, Mossy Mechanics follows the same style as its predecessors. It's quick to learn and easy to play, making it great for one-shots, but it's also surprisingly deep and plays with some concepts that affected me more than I expected it to.

In Mossy Mechanics, you are a clump of sentient moss linked to a greater Moss Mother, but you know that the Moss Mother intends on conquering the world, and you have chosen to stop her.

Of the things I was expecting before I opened the pdf, Werewolf The Apocalypse was not one of them, but that's honestly what my brain keeps comparing Mossy Mechanics to. It's immersive and intense, and it plays with similar themes of your creator being a destructive force while you are a changeable warrior who must determine where you stand.

Overall, I would strongly recommend this to anyone who likes small game systems with good crunch and great lore.

Also I am now holding out for a Plant Games cinematic universe and/or setting guide.

-Fast-Growing Projectiles lets you roll Raw Magic to hit, but this is what you normally roll to hit, and I think its intended benefit is that it lets you attack at range? I wasn't completely sure.

Thank you so much for this stellar review! It was a delight to read and I will take note of the issues you presented! 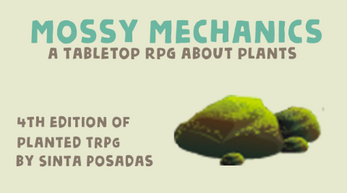