It is difficult to be a flower. Your kind are plucked, only to be left to wilt. There are some flowers who grow thorns and fight back - but not all flowers can do this. Not all plants can summon the will to become what you are - a Petal Paladin.

Find your oath. Defend the defenseless. Preserve beauty. Be the Light.

In order to download this Flower you must purchase it at or above the minimum price of $4 USD. You will get access to the following files:

Support this Flower at or above a special price point to receive something exclusive.

Each bought copy of "Petal Paladins" adds to the number of community copies, allowing someone else to grab it for free. Feel free to take a copy!

This was a follow-up game to a Succulent Sorcerers one-shot my group played a year ago. Just like the first game, this one didn't disappoint. We saved our neighbours from a rogue plant order, and a new player to the group had a lot of great creativity shine through as she used her long vines to help her friends overcome tall tables and rocky ground. A wonderful session!

Part of a series with Succulent Sorcerers, Mossy Mechanics, and Bonsai Brawlers, Petal Paladins is a small-but-meaty trpg where you play as flowers championing causes that other plants are unable to.

It's extremely easy to learn, layed out well, and all the information is nicely separated out on the page. Honestly, the layout looks almost a bit like a scrapbook, but it's a super helpful, informative one.

Petal Paladins is an adventure game, and you do have attack and defense stats as well as small, flavorful special abilities, but it's very bite-sized---ideal for one-shots and convention play.

There are a lot of little mechanics to fiddle with (such as Rot, which you can fill in to get a bonus, but you take damage and increase your stats when the meter fills,) but everything's easy to learn. This is a solid intro rpg, and way easier and quicker to create characters and a scenario for than something like DnD.

Overall, Petal Paladins might be the easiest of the Plant Games to get into. I would absolutely recommend picking up the whole series, but this and Sorcerers are very solid starting points, and if you're interested in seeing how much fun, simple crunch and world-flavor you can pack into a short game, definitely give Petal Paladins a shot.

-Page 1, Order of the Abundant Hand, "When all else fail" fails.

-Surrounded By Beauty seems like the most powerful ability in the game. Does it have a duration limit?

-I'm not sure what For You I Fight does. You pick a number of allies, take that many Rot, and then what? Is this meant to be a way to quickly fill your rot? Paired with a healer, that might allow some pretty quick stat-creep. Or does this ability increase your maximum rot dots? If so, for how long?

-Let Me Be Your Rock, what is the duration on this? Until end of combat? Permanently?

-Let My Light Protect Others feels like a much weaker version of Surrounded By Beauty. It's 1/day and relies on a roll to achieve its effect.

-Page 3, But What's The Conflict, it feels like there should be a 6th option to allow for rolling randomly on a d6, but it does seem like that would be tricky to fit spatially. 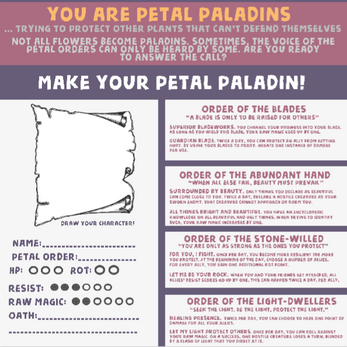